The day after Columbus Day, a silent procession of students paraded through campus holding signs and banners that read, “Thx 4 Killing My Ancestors,” “Decolonize Puerto Rico,” and “No walls, no bans on stolen land,” protesting the holiday meant to celebrate the explorer.

Columbus Day has been a national holiday since 1937, but has grown controversial due to  the historic effect that European colonization, due in part to Columbus, has had on Indigenous populations in America, not to mention the genocidal actions of Columbus on the Indigenous peoples he encountered after making his accidental discovery of the lands of the Western Hemisphere in 1492.

“Our action today at its most fundamental level stands in solidarity with the Lenni Lenape and all indigenous people in the United States and beyond whose lands was stolen to create settler states,” said Daniel Vasquez Sanabria, a Puerto Rican and Latin Studies major and representative of the Puerto Rican Alliance. Sanabria helped lead the march, holding a Puerto Rican flag. Onlookers watched and took photos as the group moved through campus.

When the protest moved in front of the library, Sanabria began with a land acknowledgment for the Lenni Lenape, an indigenous people who originally lived in New York City before it was settled by Europeans.

“We acknowledge that indigenous people continue to live under siege, surveillance, and colonial structural violence on their own occupied land and the reservations they were pushed into. We stand in support of the return of their lands. This acknowledgment is a call to commit and take on the responsibility to dismantle the ongoing effects of settler colonialism,” he said.

Sanabria articulated the need for connecting struggles from the past to the present. “This land acknowledgement does not exist in the past tense,” Sanabria said. “Colonialism is a current ongoing process and we need to further build our mindfulness of our present participation to it.” 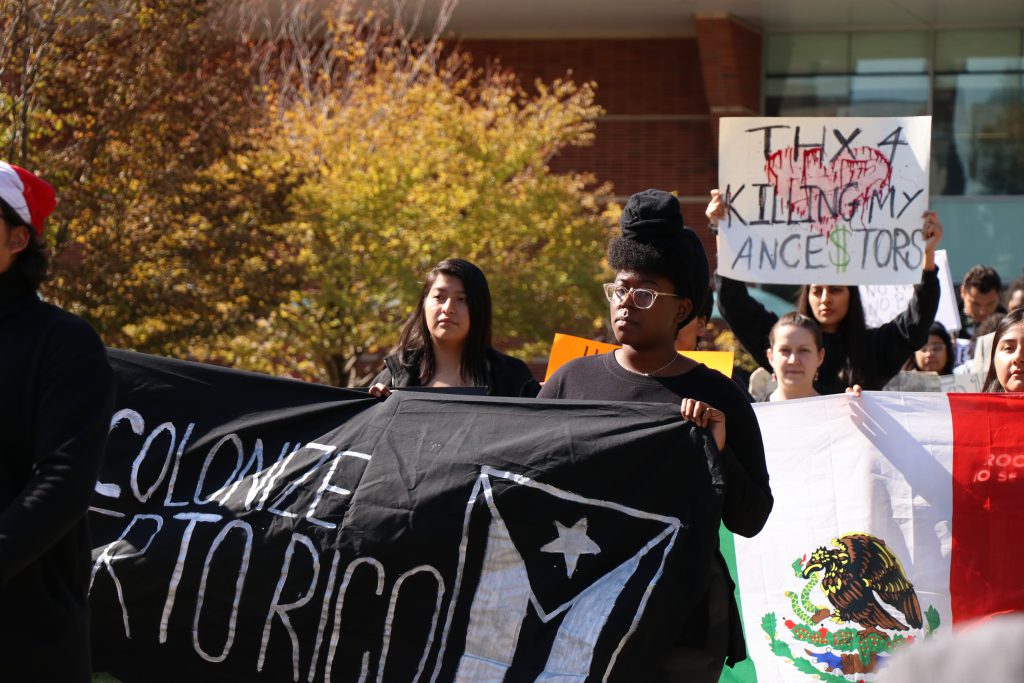 Sanabria called out Brooklyn College for observing Columbus Day and not Indigenous People’s Day. Throughout the protest, a band could be heard playing not far from the library, something which he noted in his address. “Brooklyn College made this almost impossible to have and they did not allow us to have voice projections here but they did allow a whole band to play in the loudest section of campus,” Sanabria said. “The school has never cared enough to actually do something about indigenous people’s day even though they let us have this event.”

Noel Altaha, a social worker, also spoke at the event, starting off her speech with an introduction in her language that she said was thousands of years old.

“We come on trails that have already been paved before us and when we come into institutions that are not designed by us we recognize that the ancestral knowledge is almost being taken from our people. There is a lot in the silence that has been felt in the walk that we did,” Altaha said. “We’re still here and we’re still going to be here in the future. Our people have always been here. The concept of a city is not new to our people. The borders of the south or the north are not made by us.”

Altaha also warned the students to protect themselves at Brooklyn College. “This can be a very violent space in the sense that these institutions are not designed for us,” Altaha said.

“If the policy of genocide were to exist then we would forget who we are,” she said.

Kevin Limiti is the News Editor for the Brooklyn College Vanguard. He is a reporter and photographer with credits in the Brooklyn Eagle, NY1, Occupy.com, Able News, and other outlets. He enjoys writing novels and playing guitar in his spare time.
View all posts by Kevin Limiti →

One thought on “Students Denounce Columbus Day at Protest”