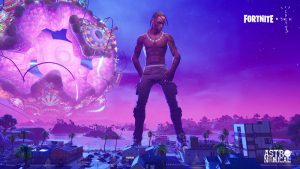 I’ve learned two things after attending Travis Scott’s Fortnite Astronomical concert. The first is that online concerts are no joke. The second is that neither is Travis Scott.

Over the course of his ten-minute mind- and face-melting set, Scott set the bar incredibly high for what a fully-online, digitally-rendered concert could be. It was also a stark reminder of what physical concerts are and how much I miss them.

It started like any other concert these days. A screen lit up with a visualizer of a planet that seemed on the brink of a collapse. An amusement park, likely the one that inspired the name of Scott’s hit album, Astroworld, sat atop it all. And of course because this all was in the video game Fortnite, dozens of us stood there at the concert venue, as a literal manifestation of this planetoid hurtled toward us.

When it finally reached the stage and hung over the crowd, a purple light that had followed it down slammed into the ground, sending the avatars of everyone caught in the blast flying. From the epicenter emerged a giant projection of Travis Scott who then began his set properly with his hit single “SICKO MODE.” To say he towered over us all is an understatement: He towered over the actual towers in the game world tenfold and only grew bigger halfway through the set.

The production values of the concert were, if you’ll allow me to be cheeky, astronomical. Godzilla-sized ethereal dancers made of lights encircled us as a larger-than-life Scott performed. He grabbed stars out of the sky and slammed them together, knocking everyone into the air. He teleported around the sky, fell from it to pound the ground, and even had wardrobe changes in the blink of an eye.

There were light shows and transitions that plummeted us to the depths of the ocean and launched us into and through space. It was an experience literally incapable of being replicated…except for the half dozen times or so it was rerun, to ensure people caught the show.

Scott’s set was almost purely comprised of hits. The show opened on “SICKO MODE” and transitioned into the Astroworld opener “STARGAZING” before Scott dropped from the sky to the drop in “goosebumps.” There was a downbeat moment as Scott performed “HIGHEST IN THE ROOM” while underwater before we took off into outer space for the finale, and the debut of Scott’s new duo with Kid Cudi, THE SCOTTS and their eponymous single.

Seeing even a digital representation of Travis Scott with Kid Cudi, whose real name (Scott Mescudi) inspired Scott’s stage name, felt like a full-circle moment. After ascending through the ranks for the last few years, Travis Scott finally made it and in the biggest possible way too.

Of course, there was something unshakeable about the fact that none of this was playing out in real life. The far reach of the digital event in tandem with the production values certainly made everything feel grandiose, even as it traded authenticity for scale.

This is our new normal, though, and Travis Scott now zooms through digital space, sitting on a planet as if it was a stoop, with a solar system’s worth of celestial bodies circling him, above it all.

Moises Taveras is the Features Editor at the Vanguard. When he's not doing that, he's playing video games or spending far too much time on Twitter.
View all posts by Moises Taveras →
← Newer Post
Student Government Election to be Held in May
Older Post →
Book Review: Men Without Women” by Haruki Murakami