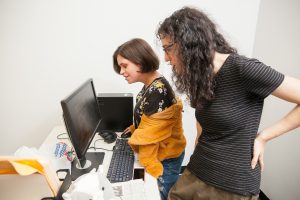 It hit me a couple days ago, after I had made a batch of corn muffins. I looked at the discarded box of Jiffy mix and thought, “I should get more of these – make some corn muffins to share with Cami and Ryan on a Tuesday night in the office.”

There was no next morning. Without realizing it, I had literally closed the door on my college years.

Some days, I feel like I owe this job not to my talent or hard work, but to fate. Not in the sense that I was destined to be a journalist – nor a good one, for that matter – but in the sense that there were no other options. One by one, I tried every other door, and the knobs turned to sand in my fingers; until finally, all that remained was 118 Roosevelt.

I started at what was then Kingsman in 2016. I had admired the paper from afar for months: it was scruffy, kind of like me as a freshman, but the reporting was solid. But it had too many typos. I e-mailed the editor-in-chief and asked if I could edit the copy. She said yes.

It was the beginning of a long and horrible four years. I failed too many classes, lived at the epicenter of too many stupid college scandals, and never once went to bed on Tuesday before the toll of midnight. And I wouldn’t trade it for anything.

The tradition in these sort of farewells is to thank Brooklyn College, to attribute your success to this unique and wonderful institution. But I can’t lie: I only went to Brooklyn College because I was too poor to attend Vassar. To pretend I wouldn’t have excelled at a cushy private college, or that I liked watching my campus literally crumble before my eyes, or having a class end early when my classmate had a heat stroke in a 90-degree lecture hall – is sour grapes.

To praise Brooklyn College for its diversity and working class character, as many do, would be even worse. It is not laudable that of all the colleges in America, only one is even remotely accessible to the working poor – it is despicable, a stark reminder of the class divide in this country. “The Harvard of Flatbush?” Don’t believe the hype: beyond the gleaming exterior of the clock tower, this college has a bevy of problems, from failing infrastructure and departmental corruption to adjunctification and austerity. I should know. I’ve spent four years and 96 issues documenting ‘em.

But hey, I sure made the most of my stay here – and I met some pretty cool people along the way. In no particular order:

To Joe Modica, Lisa Flaugh, Zeus Sumra, and especially Tati Bellamy-Walker – thank you for making those delirious midnights in the Kingsman office bearable, and sometimes even fun.

To Zainab Iqbal and Sandy Mui, for doing an admirable job running the only slightly inferior Excelsior – even if you did publish too many pieces about the journalism program, and/or Netflix.

To Dani Kogan and Sam Castro, for doing an admirable job running the only slightly inferior Hound – even though, like, jesus, you put fucking Drake on the cover? DRAKE? Come on.

To Mohammed Ali, for making the best damn kofta-over-rice on campus.

To Profs. Anna Gotlib, Anthony Mancini, Brian Dunphy, Katherine Fry, Ron Howell, Serene Khader, and the late great Bob Viscusi – thank you for your advice, and for letting me crash in your offices uninterrupted once a week.

To Joe Fodor, for letting me steal all those CDs you had lying around.

To WBCR, for “letting me” steal all those CDs you had lying around. (You didn’t even notice they were gone, suckers.)

To Jack Coleman, for treating me like a queen, and indulging in our arms race to see who could smuggle the most debauched sexual terminology onto our arts pages.

To Camila Dejesus and Moises Taveras, the Vanguard power couple whose magnetic attraction overpowered my steadfast cockblocking and became the very loud heart of this paper.

To Allison Rapp, for your cultural savvy and fashion advice. Between your expertise in jam bands and folk rock, and my knowledge of heavy metal and the entire They Might Be Giants discography, we possess all-encompassing knowledge of the white people musical canon.

To Noah Daly, for sticking that caricature of Rudy Giuliani on our dartboard, for not letting me be a jibbering idiot at budget meetings, and for believing in my brain and my heart more than I ever did. And for letting me bogart your dank-ass kush.

To Ryan Schwach, for growing from a cub reporter to a grizzled BC news veteran before my eyes. You are the only other person who really comprehends how amazing it is that this paper has transformed into a publication actually worth reading.

To Paul Vasquez, the “double rainbow all the way” guy – like, I didn’t know you, dude, but you seemed like a bro, and we’ve got the same last name, and I love rainbows almost as much as you did. It’s sadly appropriate that you would pass on the same weekend I pass on from my most precious thing in my life.

To Jay Jankelewicz – I miss you so damn much.

And to all the new writers (too many to name) who I’m leaving behind, for whom the era of struggling to fill an eight-page broadside is a distant fantasy. Each and every one of you has a bright future ahead of you, and each and every one of you is part of the reason why this final issue of Vanguard is the greatest issue I’ve ever seen. You’ve got bright futures ahead of you, and I love you all.