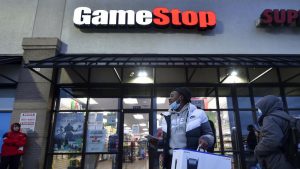 If you grew up playing video games, even passively, GameStop was a place you knew and possibly have a soft spot for. I remember going to the GameStop on Broadway around 105th street and buying used games for $5 to $10. These were games I couldn’t afford a couple years prior but that were now within my reach. I loved it.
So, I have a predilection to absorb the narrative that GameStop was going to be decimated by evil hedge funds and Wall Street types until the white hat disruptors came to it’s rescue by beating them at their own game. Ok Boomer, take that.
It fits perfectly into preconceived ideas that I have chosen to believe even though I acknowledge that they are well known sales pitches used by the likes of Mark Zuckerberg and Donald Trump. Two of these ideas are that disruptors exist outside the establishment and the other is that any new movement reflects the will of the people. The latter borrows from the concept of crowdsourcing, where the value of a product is created by the fair and equal voting on an asset by a diverse crowd. The idea is that the correct value is eventually reached by aggregating all the responses from the crowd.

The problem is that I’m not feeling it.
I had assumed that the story started last week, because that is the first time I heard anything about the price of GameStock. If there was more to the story, I would have assumed that it would have been included in countless news stories that flooded our timelines.
It turns out that assumption was wrong. GameStop was flagged as an undervalued company by legendary investor Michael Burry in July of 2019. He took a large position in the stock causing the stock price to climb. A major player on the subreddit r/wallstreetbets, Keith Gill is a finance guy in his mid-30’s. He has been working the GameStop stock just as long, if not longer. Gill appears to be leading the charge to drive up the price.

This fact challenges another assumption that I had, which was that people on Reddit are everyday people. Often that is probably not the case. But MIT professor Sinal Kayhan Aral suggests that using social media to manipulate markets is not a new thing but can have serious implications. Syrian hackers hacked Associated Press twitter page and falsely reported that then President Barack Obama was killed in a plane, causing large shifts in the market. This is known as the “Hack Crash” of 2013. So if any nefarious actor could sway people using social media this could cause great damage.
This goes back to how we often assume that people on social media are like us. But are they? I am reminded of a great New Yorker cartoon that has dog speaking to another dog and saying “On the internet no one knows that you’re a dog.”

Another way to look at this is to simply follow the money. One thing to remember about any financial transaction is that there are always two sides of a trade, even a short sell. In order for the hedge funds to make large short positions on GameStock, there needs to be another hedge fund to take the other side of that trade. If one hedge fund lost millions of dollars, then another would have gained millions of dollars. These transactions have been taking place long before last week. I assume that those who made millions weren’t Reddit users, but at this point I am not sure.

Lastly, there is a belief the Security and Exchange Commission (SEC) will step in to correct any wrongdoing. It is the SEC’s job to regulate markets and protect investors. One problem is that the SEC is usually two steps behind. Another problem with the SEC is that it can only enforce what it can win in court. People in the commission are mostly lawyers, and have to be able to win a case in front of a jury. That means the jury of lay people needs to be able to understand how social media produced a market event. Financial markets are so complex that it is hard to get this kind of conviction.
No pun intended, but the Jury is still out on Social Media. There is no bigger example than Donald Trump. Did the Russian government sway the US presidential election by the use of social media? Did Donald Trump himself cause the siege on the Capitol Building on Jan 6? People have strong opinions either way, but there is not a consensus in the law or people’s opinions. Until a consensus can be reached, assumptions on the GameStop short squeeze will likely be in-flux.