Brooklyn Students were left waiting outside in the rain on Monday, Nov. 18, as alarms sounded in Boylan Hall after some steam leaked from the basement. Many did not know if it was a real emergency or not.

“I was in class, and my professor wasn’t sure if it was a drill or not,” said Mahir Imityzz, a Computer Science major. “Everyone thought it was some kind of high school fire drill.”

For about fifteen minutes, the swarm of students stood outside Boylan’s premises. Some asked a nearby Public Safety officer what was going on, to which he ensured the evacuees that nobody was harmed in the unexpected incident. “All I can say is that everyone is safe,” said the Public Safety officer.

Noticeably, there was ambiguity surrounding alarm. Previously, BC’s halls were equipped with an outdated alarm systems that sounded off nuisance alarms, or false alarms, frequently. As a result, occupants have delayed their evacuation during fire drills and emergencies over the years. “I’ve been here for 16 years, and people have been taking their time and not taking alarms seriously,” said Public Safety Lieutenant Arkeen Dunpal.

Some students have been distinguishing a false and real alarm by listening to the length of the siren. “Someone from my class said that if the alarm is more than two minutes long, it’s real. And that’s how we all knew it wasn’t a drill,” said Imtiyzz. However, Dunpal argued that this tactic is inaccurate and potentially fatal. “Hopefully, people don’t go off that time in their heads, because you can die from smoke inhalation in under a minute,” he said.

The alarm sensors at Boylan detected the leaking steam, with occupants remaining unaware of the incident. “It was just steam, so people probably wouldn’t have seen it,” said Dunpal. Upon the central monitoring station’s call, two fire trucks arrived at the scene as BC members continued to exit the building. Thereafter, firefighters proceeded with their routine to extinguish any possible threat. “We work on isolating the problem, and then, house technicians will fix the issue,” said an unnamed firefighter.

In previous evacuations, the BC community was preparing for unexpected incidents like the one on Monday. Fire drills are performed on-campus in compliance with the NYS Education Law 807, which requires that BC and other colleges/universities execute at least three fire drills per year. For each semester, Public Safety conducts two drills to satisfy this requirement. These practices allow personnel and BC members alike to know what to do when an emergency strikes. “During a fire drill, we already have a plan […] but, when it really happens, it’s going to be up to the students to remember or choose the nearest exit without delay,” said Dunlap. 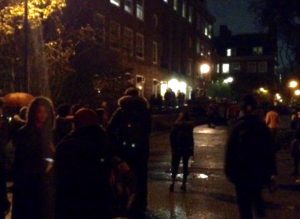 Students huddled in the cold outside of Boylan Hall due to the false alarm. / Gabriela Flores

As for non-ambulatory occupants, they must locate themselves to a nearby refuge area called Disabled Persons Fire Emergency Assembly Area during evacuation. These meeting spots are supported by FDNY, being that Public Safety officers are unable to handle the relocation of these individuals. “Recently, we had a meeting with the Disabilities office, and we brought down the Fire Department,” said Dunpal. “These areas are where the fire department expects non-ambulatory people to be. That’s our plan for those people.” According to Lieutenant Dunpal, no disabled persons were reported to be in Boylan during the steam leakage.

As of now, the steam issue at Boylan has subsided. With the regularity of fire drills and consistent improvements in evacuations, Public Safety believes that the BC community can better the chances of their security during future emergencies with their full participation in drills. “People get annoyed, but it’s for safety purposes,” reiterated Dunpal. “It’s serious right away, so get out of the building.”