The Bulldogs started the game slow, but after an early timeout, the team came out and was able to get its offense going.

Behind smart passing, Brooklyn was able to find open shooters and hit three-pointers, closing the deficit and rallying momentum in the first half. At the 13 minute mark, the score was all tied at 13.

Senior Michael Tesoriero brought the ball up for the Bulldogs and had a great first half. His shot was on point, making three three-pointers in the first period alone. He also was a vocal leader on the floor, running the offense and heading the defense.

After the slow start, the defense of the Bulldogs became energetic and tenacious. Players cut into passing lanes, rotated strongly for defensive help, and were strong in the paint to stop William Paterson from getting easy buckets. The early timeout that woke up the team seemed to work wonders for interim head coach Jeffrey Jean-Baptiste. The Bulldogs went into the half leading 34-29.

The guard play was extremely strong by the Bulldogs. Tesoriero, along with seniors Jordan Wright and Anthony McClean, played very well off one another. On several occasions, one of them would drive into the lane, collapsing the defense, and then kick a pass out to an open shooter. Their quick feet and chemistry really worked well in the minutes they shared together.

However, all three guards are relatively undersized, and this pointed to Brooklyn’s biggest problem in the game: rebounding. Offensive rebounds were relatively nonexistent, and often they were unable to secure the defensive rebound as well, leading to second chance points for William Paterson.

Tesoriero’s shot in the second half wasn’t falling as much, but he made up for it with his slick passing. There were two separate instances when he had a no-look pass that resulted in a layup for his teammate. He finished with eight assists on the day.

But William Paterson’s forward, sophomore Nasir Fields, dominated the boards, and as the game went on and the fatigue began to show, his impact was too great on Brooklyn’s side of the court. Ultimately, it was a strong performance by the Bulldogs, but they ran out of gas, and have a glaring weakness that they need to address.

After their second loss of the season to Wittenberg University Saturday, Nov. 16, 78-87, Brooklyn is being outrebounded 98-55 on the season. That is a massive disparity that needs to somehow be fixed.

Though it is just two games in, Brooklyn is shooting the ball extremely well, with a 3-point percentage of .408. It will be noteworthy to see if they can keep that up, and hopefully improve their rebounding. 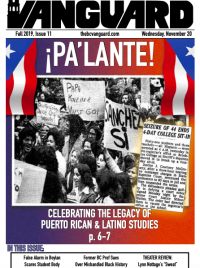 When he moved to New York in 2015 from a small town in the Netherlands, Ak Jansen had already completed his undergraduate studies in textile [...]