Brooklyn College Student Government’s (USG) political committee held two town halls this week with the aim of bringing in more student voices and ideas into their efforts to improve life on the Brooklyn College Campus.

The town halls were held Thursday, Nov. 14 in the evening and Tuesday, Nov. 19 during common hours, serving sushi for the first town hall and chinese food for the second.

“It starts with you guys,” said Zain Quershi, a member of the political committee and student advocate, during the first town hall. “It’s really your voice to let it out.”

The town halls covered a wide range of topics. For instance, USG President Alyssa Taylor said that she was looking into an initiative to bring back the college bookstore, a grievance from students ever since Boylan’s bookstore was closed in the fall of 2017. One student voiced her displeasure that the Starbucks next to Whitehead was closed down and called the prices at the Boylan cafeteria “outrageous.”

Financial aid was a hot topic for both hearings, with one student saying that he lost his financial aid because he could not get into some of his classes.

“This is something that has been a problem and is actively being looked at,” said Lilian O’Reilly, Vice President for Enrollment, who was in attendance at the second town hall. “We certainly don’t want anyone losing their financial aid.” O’Reilly encouraged individual students to speak with her afterwards. 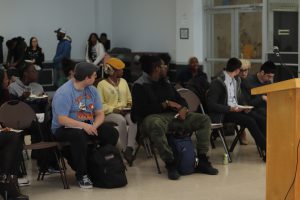 Ronald Jackson, Vice President of Student Affairs, also was in attendance for both hearings and spoke to the concerns of students who were having tech issues.

Other issues included the heating of Ingersoll Hall – to which Qureshi admitted that they, “haven’t found a solution.”

Also in attendance at both hearings was Hamilton Raymond, Associate Director of Student Activities. The political committee was also concerned about how they could widen Bulldog Connection, which is intended to connect students with activities and events, to be used by more students. Raymond cast some doubt at the website’s future, saying not enough students were using it.

While nothing was resolved in the town halls, just by having them USG has signalled that they are intent on finding avenues to address student concerns.

Kevin Limiti is the News Editor for the Brooklyn College Vanguard. He is a reporter and photographer with credits in the Brooklyn Eagle, NY1, Occupy.com, Able News, and other outlets. He enjoys writing novels and playing guitar in his spare time.
View all posts by Kevin Limiti →
← Newer Post
Notes on Solitude
Older Post →
PRLS Holds Count Down to 50 Year Celebration With Encuentro Panel