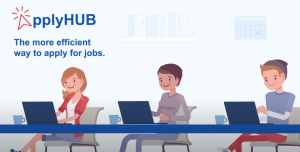 “It was really when I was applying myself, and I had this frustration, and I realized I wasn’t the only one,” said Floradewan. “I was in a place of uncertainty, and I wanted to not only help myself but also be there and help others who are facing the same thing.”

During her job search last year, Floradewan found that her friends and other job seekers were having their offers rescinded due to the pandemic. Though she had an internship where a full-time position seemed feasible, she was concerned about not securing it. This prompted her to send her applications to numerous openings with most asking the same questions and making the process more time-consuming than necessary, she realized.

“I was applying to other places, just to be safe, and one of the problems I ran into was how annoying and tedious the process was,” she said.

Soon after, Floradewan began brainstorming the backbone of ApplyHUB. To set her idea into motion, Floradewan joined CUNY Startups, a program intended to give aspiring entrepreneurs a leg up in their business ventures with mentorship and guidance. There, she recruited her ApplyHUB crew, hired a freelancer to develop the AI system, and learn more about the ins and outs of entrepreneurship.

In the coming week, Floradewan and her colleagues will soft-launch their free browser extension, releasing it to around 65 users before developing and distributing all of ApplyHUB’s intended features. Under an upcoming paid subscription, it will have an AI mentor that will improve a user’s resume engagement, keep track of their applications filed across different platforms, and provide other services.

“It’s definitely a commitment, but I knew this while going into it, so I already had that mindset where I know it’s going to be a lot, but it’s something that I’m very passionate about,” said Floradewan. “I just want to continue beyond the program as well.”

In their final semester with CUNY Startups, the ApplyHUB team intends to win the program’s final competition and land a $10,000 grant from their investors. They have set out to first trademark and license their business and garner feedback from their soft launch. Once they gain funding, they aim to begin developing their premium subscription. After that, they will connect with career centers university-wide, shoot to implement ApplyHUB on CUNY schools’ career portals, and eventually expand nationwide.

“We have a better grasp of where we’re expected to grow, especially since we’ve been in this program longer,” said Floradewan, after sharing how their initial revenue expectancy and goals have changed since last fall. She thinks her team’s plans are tangible depending on how they market themselves.

Since they’ve joined forces, ApplyHUB team members have not met in person, which has presented some challenges in establishing connections besides their work together. Nonetheless, they keep in touch by constantly hopping on calls. “I think we all have a good mix and a good idea of what our responsibilities are and how we all can work together,” said Floradewan.

With her BA in Business Administration and Marketing, Floradewan was able to head the research on ApplyHUB’s target CUNY demographic. After surveying 210 students, she and her colleagues found that it took 6 to 7 months on average for CUNY job seekers to gain employment during the pandemic. Knowing this, they were able to determine how long a user can be their customer.

Having experienced similar challenges last spring, Floradewan found that it’s important for CUNY job seekers not to give up searching after numerous attempts.

“Don’t be disheartened if the first person you reach out to or the first job you apply to isn’t getting back to you,” she said. “You just have to try a different method of applying, reaching out to people, and networking.”

As ApplyHUB continues to grow from the efforts of its crew, Floradewan will personally take her  experience of launching her first startup with the aid of CUNY Startups in her future entrepreneurial endeavors. She is determined to be her “own boss” and will work towards having ApplyHUB reach its fullest potential as time passes.

“I was thinking of two ways I can approach this – either it grows nationally, or it doesn’t. Either way, I’ve learned a lot from this program,” said Floradewan. “And how to not only pitch my ideas to others but also pitch myself, which is really important in any job market.”