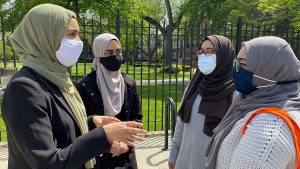 With Eid al-Fitr this week, a Brooklyn College student created a petition calling for the CUNY administration to cancel classes in observance of the Muslim holiday, garnering over 13,000 signatures in one week. The petition demands that CUNY recognize Eid on their academic calendar and acknowledge the challenges Muslim students will face between celebrating their holiday and tending to their academics.

“The fact that they didn’t account for Eid is a whole slap in the face,” Ridwan Waseef, a Hunter College student who signed the petition, told the Vanguard. “They could’ve at least given us one day off.”

Eid al-Fitr is typically a three-day celebration that marks the end of Ramadan, the month in which many Muslims fast from sunrise to sunset. Since the date of Eid is subject to change per the lunar calendar, this year, it begins on Thursday, May 13, near finals week for CUNY students. The University offers religious accommodations for students to have “equal opportunity” to make up missed work or classes. Students at BC can ask their professors for accommodation or seek further advisement from administrators such as Student Affairs, according to an official document outlining faculty obligations for syllabus preparation.

“The College is extremely sensitive to the various religious observances of its diverse student body and provides religious accommodations upon request. Students can make these accommodations through their instructors,” wrote Richard Pietras, BC’s Media Relations Manager, in a statement to the Vanguard. “Finally, CUNY’s nondiscrimination policy prohibits discrimination on the basis of religion.”

Many students across the university are demanding that CUNY recognizes Eid since no Muslim holidays are currently observed on the academic calendar.

“I understand that CUNY already made their calendar for this year, but for next year, they have the time to change it,” said Israt Islam, the petition creator.

Islam began the petition after she and her fellow CUNY peers realized that the University canceled classes for other major holidays such as Christmas and Rosh Hashanah. About one in every ten New York City residents identifies as Muslim, as noted in the petition. As the second-largest religious community globally, Islam emphasizes that it is important for CUNY to recognize Eid and their Muslim student body.

“Not only Muslim students are supporting us. But it’s everyone,” she said. “Everyone is understanding that this is a right we need to have, and it’s making me proud of CUNY students and non-CUNY students and everyone.”

Salwa Najmi, Hunter’s USG Junior Senator and Vice President of the Muslim Student Association, reached out to Islam. Najmi and her peers wrote a USS resolution unanimously passed in mid-March calling CUNY to cancel classes for Eid. While writing the resolution, Najmi created a coalition of Muslim student leaders from other CUNY MSAs. Together they signed a joint letter, attaching USS’s decision, in an email to Chancellor Felix Matos Rodríguez requesting a meeting.

“We love that CUNY recognizes other religious and cultural holidays. Muslims should not be left out. Though we’re happy that CUNY has religious accommodation in place, this is not enough,” said Najmi, noting the importance of implementing a day off for Eid given that this year it lands during a time where review sessions and finals are in place.

The coalition has been in contact with Rodríguez after Najmi followed up with him once the petition reached 10,000 signatures. As of press time, the coalition and Chancellor have not set a definitive date to discuss the issue. In partnering with Islam on rewriting the resolution, adding context to the petition, and spreading awareness of the issue, Najmi and her colleagues aim to continue pushing CUNY to recognize Eid for future semesters.

“The effort goes on. This is an advocacy that we started months ago, and we hope to continue until we see Eid al-Fitr and Eid al-Adha included in the CUNY calendar,” Najmi said.

Najmi also mentions that it is essential for CUNY as a public university to follow in the footsteps of the Department of Education who has given NYC public school students off on Eid since 2015.

“Being a Muslim myself, I found it outrageous that we didn’t get off for Eid in the CUNY system when we fought so hard to get off in the DOE system,” said Fariha, a City College student who did not want to share her last name.

With no official statement released by CUNY about the pending call for class cancelation, the University will likely remain open on Eid. The Vanguard reached out to CUNY as well as members of the CUNY Board of Trustees but did not receive an answer before press time.