In the dire and distant future of “Revolutionary: A Futuristic Musical,” automation and totalitarianism have forced a generation of youth onto the streets. Innocent buskers and drag queens are forcibly micro-chipped by a paramilitary force of literal “Robo Cops.” Worst of all, the U.S. dollar has been replaced with something called “cryptocoin.” This on-the-nose oppression cannot stand! It’s high time, the innocent buskers and drag queens agree, for something… wait for it… “revolutionary!”

Unfortunately, the “revolution” presented in this musical is less Che Guevara and more Deepak Chopra, with a touch of Alex Jones. Do you believe the Illuminati control all world governments? Do you believe that we only use five percent of our brains at any given time? Do you believe that, by activating our DNA beyond our material three-dimensional consciousness, we could enter a new universe free from corporate control? No? Well, don’t worry. As my playbill helpfully informs me, “even though certain concepts like Fifth Dimensional Consciousness [!] and the Crystal Skull [!!!] may be new to some of you, the ancient wisdom they represent is universal and archetypal.” I’ll have to take playwright Prasad Paul Duffy’s word for it. Tragically, “Revolutionary” left my chakras thoroughly inert.

Fortunately, it also left my funny bone thoroughly tickled. Between the mind-bending script and the totally earnest performances, “Revolutionary” is so funny that it’s impossible not to fall for its mystic charms.

Indeed, the play and the actors are so amiable that even at “Revolutionary’s” most offensive, I honestly couldn’t help but smile. Take, for instance, the romantic plot between Gabriel (Zach Triska) and Maya (Kurt Bantilan). Triska is a long-haired drifter who strums his acoustic with gusto and approaches every scene with wide-eyed wonder. Bantilan plays… basically Angel from RENT, but with psychic powers. Gabriel has the hots for Maya – but when he’s informed in the crudest way possible that the object of his desire is transgender, he lets out a sheepish “no homo.” “Maya’s a free spirit! I’m a free spirit,” Triska yelps, “but I’m not THAT free spirited!” This whole plot should be wildly offensive, and it kind of is, but Zack Triska’s line delivery and bulging eyes are so guileless, he can make anything feel innocent and charming. Even inane zingers like “Home of the brave? More like home of the SLAVE!”

The music and lyrics by composer Theo Grace are nothing to write home about. Most of the songs are interchangeable acoustic guitar ballads using your standard pop-rock tropes, except for the songs that are interchangeable piano ballads using your standard pop-rock tropes. Sometimes the actors harmonize, which is pleasant. Sometimes they sing solo, which none of them are particularly good at. Sometimes they rap, which all of them are awful at, although this is largely on account of Theo Grace’s painful slant rhymes. (A sample bar rhymes “open” with “composting.”)

Similarly, the choreography is mostly pedestrian, although Duffy and choreographer Laura Pierpont are smart enough to give the two actors who actually excel at dance a showcase for their talents. Izabel Dorst gets to do some graceful ballet in an ayahuasca-induced trance, and Henry Nwaru (a recent graduate of BC’s Acting BFA program, incidentally) gets to show off his breakdancing on “Go With The Flow,” a pop-rap that takes its cues from High School Musical (!) rather than Hair. The slickest moves of the show, however, come from James McGonagal, who takes the role of “Robo-Cop” a little too literally.

Needless to say, anyone expecting serious political commentary from this play will be deeply disappointed. Duffy’s script may extol the virtues of “fifth-dimensional consciousness,” but the characterization and thematic material is firmly one-dimensional, proudly flouting the principle of “show, don’t tell.” And for all its heavy-handed attempts at political commentary, “Revolutionary” feels weirdly out of touch with our reality, as though popular culture hasn’t advanced beyond the Summer of Love and remains permanently frozen in the Age of Aquarius. (Case in point: a major plot point involves the quasi-fascist government hauling innocents by the thousands into unlivable concentration camps run by… FEMA.)

Still, it’s impossible to hate a show so devoid of irony, and so genuine in its intentions. “Revolutionary” may be the Marianne Williamson of musicals, but is that such a bad thing? Maybe what the world needs now IS love, sweet love. Maybe we SHOULD have a space to “purify our consciousness of all societal mind control.” And maybe the government IS putting chemicals in the water to make all the frogs gay. Just take the play for what it is, and bask in the opportunity to open your mind to the universal and archetypal wisdom of the Crystal Skull. 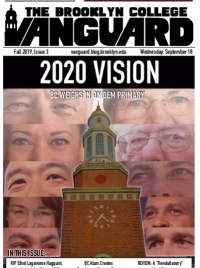 For years, CUNY educators have been pushing for adjunct pay to be doubled to $7,000 per course, but new data suggests that a majority of [...]

On the Record: David Knopfler – Heartlands

It’s true -- the weather in Scotland is abysmal. It began to rain the moment I stepped out of the airport doors, and has been [...]