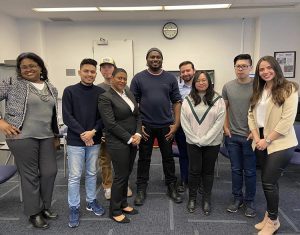 It was less than a year ago that Jehosephat Bozeman was a Television and Radio student, walking the halls of Brooklyn College with dreams of working in the industry. On February 18th, Bozeman, walked these same halls once again, but this time as an alumnus who currently works for the live operations team at ABC News. Bozeman was invited back to his old stomping grounds by Michael Sarrao and the Magner Center to share his experiences and give some advice to students interested in pursuing a career in Television.

Bozeman’s connection to the Magner Center began in 2016 as an undergrad when he first met with Michael Sarrao to review his resume. Bozeman, a Television and Radio major at the time, had worked as a Post-Production Assistant and Intern for HBO Documentaries in 2015.

After noticing Bozeman’s work at HBO earned only a brief mention at the bottom of the resume, Sarrao encouraged him to make it more prominent. “We need to change this. We need to have a summary that states that you worked on an HBO Documentary. That’s the first sentence they’re going to see,” Sarrao told Bozeman. Ultimately, this change helped Bozeman get hired as a Studio Technician at A&E Network, a job he did not enjoy and left after eight months.

“I didn’t like it,” revealed Bozeman. “I was aggressively applying for a lot of editing positions to get in the door. That was my thinking.”

A few months later, Bozeman got a phone call from Brian Miller at ABC News, who asked him if he wanted to talk over the phone. Bozeman suggested that they meet in person instead. “That was just me taking initiative,” Bozeman said laughing. “I’m better with face-to-face contact.” Soon after, Bozeman was hired to work at ABC News and revealed that it was his ability to use a switchboard that ultimately landed him the job, a skill he acquired from his experience at the A&E Network.

In order to be successful at ABC News, Bozeman expressed how vital it is to learn certain software programs. “For ABC, you have to learn Avid Media Composer, as well as a little bit of photoshop,” Bozeman said. “Start Adobe After Effects first and then jump into Avid.”

At ABC News, Bozeman’s job ranges from streaming live content for programming to editorial work and fact-checking. This includes working to make sure there is no dead space between content, providing graphics for live events, writing the captions, and working with an investigative team to ensure accuracy in reporting and avoid libel.

Bozeman cited the recent death of Kobe Bryant as an example of when things go wrong. “Someone in the company got suspended for reporting Kobe’s whole family died. That wasn’t true, and he was handled with disciplinary actions,” Bozeman said.

In addition to these challenges, Bozeman revealed the added stress that comes from unpredictable work hours. Despite having a set work schedule at ten hours for four days a week, Bozeman reminded the students in attendance that he could be called in at any time.“Do not expect a work-life balance because you’re in news and news can break at any given moment,” Bozeman said. “It’s very unpredictable. If an explosion were to happen, everyone is in tomorrow.” During the recent impeachment hearings of President Donald Trump, Bozeman revealed he had to work for almost a week straight and overnight on occasion.

At the end, both Bozeman and Sarrao offered advice to students on how to be successful in this industry and set yourself apart from the rest.

“I tell students you have to be an entrepreneur for yourself. You have to develop your own content,” Sarrao advised.

Bozeman agreed saying, “That’s the best way to go. Do not be so closed off. Be open to everything around you.”