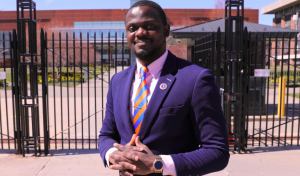 The semester being put on hold hasn’t ended the electoral race for Undergraduate Student Government president. Of the three students making their case for USG president this year, Dapo Ibrahim plans on running a platform that puts safety of students first, with transparency and increased awareness trailing right behind.

Ibrahim was born in Nigeria and moved to the United States in 2014. He currently lives in the Bronx and works full-time as a store manager at Rite Aid. In addition to his organization and managerial skills, in light of the Coronavirus outbreak, Ibrahim has also been trained in the best practices for mitigating many of the common mistakes that people make dealing with widespread illness, having received pharmaceutical training in the field.

“Student safety has always been something that I have pushed for,” said Ibrahim while highlighting the contours of his platform. He has reflected this concern while being one of the student government members who actively pushed to keep the library open for twenty-four hours during finals. He said that he recognized both the need to keep the facilities open late but also the importance of having safety officials around and available for students leaving the campus later than usual.

In regards to the Coronavirus in particular, Ibrahim was clear about the importance of understanding its impact on the student body. Part of the solution, he suggested, could come in the form of using surplus USG funds in order to create emergency funds, grants, and scholarships to students.

This plan harkens back to one of Ibrahim’s core objectives: to help students understand that they are a part of USG even if they aren’t an elected member and that their voice matters. The way Ibrahim sees it, the entire USG fund comes from the student activities fee which is paid for by the students enrolling each semester. He wants to make sure that this large pool of money is spent in a way that benefits the student body at large and gets people active in student government.

“Share your voice,” is one of the campaign team’s slogans which packages this core objective. This platform objective raises the needs and concerns of the student body at large and aims to make more students aware of their power to affect change in their college.

“When we say share your voice, we mean that every student can come under one, unified voice and put forward all of our demands, issues, and concerns,” Ibrahim said. He envisions an administration that thinks just as much about the years to come as it does about the present.

“There is no denying the fact that if we get into office, we only have one year,” Ibrahim said. “But with that one year, if anything, we can get so much done if we all come together. And not just get stuff done for our administrative year, we can set a very good foundation for the incoming administration as well and start building a stronger USG.”

So while there are many issues that demand immediate concern, part of his objective, if he wins the race, will be to streamline things to best help students. Part of his vision is to work with the administration to better format online and in-person student resources. As a transfer student, he had first-hand experience navigating the maze of links, offices, different sites, and phone numbers in order to make sure that his status as a student was secure. The plan is to streamline these different resources under one umbrella resource to best help students.

In acknowledging that he would only have one year to enact as much change as he can, his running mate is currently finishing his second semester at Brooklyn College. Chika Otisi is a Freshman Urban Sustainability major who Ibrahim first saw on campus speaking with Financial Aid on behalf of a student who wasn’t able to. This younger running mate emphasizes the need for continuity and having an administration focused, in part, on the future.

Outside of USG, Ibrahim has stayed productive. In addition to his full time career as a manager, he also is an avid reader and writer. He has published a book of poetry entitled Riveting Oaks, which is available on Amazon. Apart from his writing, Ibrahim is also the CEO of Ignite Africa, a non-profit which provides support for internally displaced persons in developing countries.

Throughout all of his extracurricular work, the importance of leadership remains throughout. Ibrahim hopes to bring his leadership qualities to USG and enact policies that are designed to “restore a voice to the student body.”

“Whatever we do, students come first,” reiterated Ibrahim. This phrase almost becomes a mantra that echoes throughout his platform and his plans as he runs for USG president.