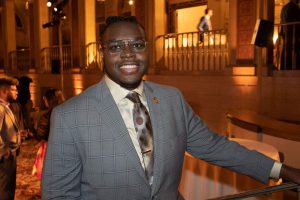 Three candidates hope to win the presidency of Undergraduate Student Government (USG), including Michael Davis, a double major in Film and Political Science at Brooklyn College.

“I believe in serving the students,” said Davis. “I want my BC family to know they have actual power, and that their voice will be heard through the megaphone that is supposed to be USG.”

Davis is a junior and a Brooklyn native, having grown up mostly in East New York. At ten years old, Davis’ young life was changed by an accident that left him unable to walk. Over the next decade, Davis was mostly homeschooled. Around the same time he got his GED and began applying for colleges, he received surgery on his legs and learned to walk again.

“Once I could wake up in the morning, stand on my own two feet, I knew I could do anything I put my mind to, as long as I had the right help and support along the way,” he said.

Davis was accepted into Brooklyn College’s Search for Education, Elevation, and Knowledge (SEEK) Program. A passionate writer, Davis took on a film major with a concentration in screenwriting. He chose political science as his second major.

“My experience thus far at Brooklyn College has been life-changing,” he said.

Davis dove immediately into involvement at Brooklyn College. Through SEEK, he interned for Puppetry in Practice, a nonprofit organization on BC’s campus providing resources to teachers bringing arts into their classrooms. In his sophomore year, he became a Peer Mentor to freshmen in the SEEK program, and he is currently the Secretary of BC’s African Student Union. He was a member of USG’s Senate last year, but he resigned this semester to intern at the Mayor’s Office of Appointments, where he creates resume profiles for job-seekers and helps write the office’s newsletter, among other duties.

Davis was proud to be a part of USG.

“Yet, I wasn’t satisfied with its lack of presence on campus, lack of outreach, and communication with the student body,” he said.

Davis felt there was a lack of transparency in the student government, as well as a passive display of title. Both Davis’ opponents for candidacy asked him to be their running mates this semester, but he declined.

“I opted to run myself because this campaign needed to be and is about representation and the call to accountability,” he said. “There’s more to student government than social media logos and looking the part. There’s service.”

Davis says BC’s rich history is defined by diversity and activism, as embodied by alumni like Shirley Chisholm, the first black woman elected to the U.S. Congress, who helped found SEEK. He believes his campaign reflects the diversity of BC’s community. His emphasis on representation is why he chose Vanessa Collazos, a member of the Political Science club and treasurer of the Queer Student Activist Alliance, as his running mate.

“Vanessa and I are the only team with gender equity, and we’re in this to serve,” Davis said. “Not because we’re seeking a title or trying to make up for previous failures.”

Under his and Collazos’ leadership, Davis promises more town halls to strengthen communication between the student government and students. He wants USG’s presence on campus to be more visible through additional events. He hopes to give students returns on student activity fees, and he says he is committed to democratizing USG’s senator replacement and appointment process. He also wants to create more school merchandise.

Davis is also calling for the organization of a homecoming event for the class of 2020, who will not have a commencement ceremony because of CUNY’s closure.

“We must have compassion for each other in this crisis, fight for each other and not against, and support each other as best we can,” Davis said. “But that shouldn’t stop when this is over. We students have more power than we realize.”

Though the USG elections have been delayed until after spring break because of the closure, Davis remains hopeful in his campaign’s momentum and message.

“Yes, we are political science students, but, above leadership that people tout in campaigns, we are students,” Davis said. “We tout equality. Sameness. We are you. And we want the best for you and us — together.”