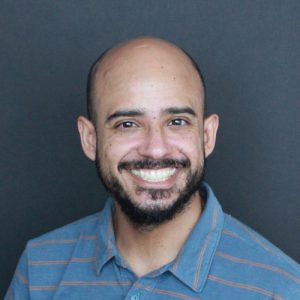 For Brooklyn College alum Omar Olivera, art has always played an important part in his life, and doesn’t know who he would be without it. Regardless of his demanding work as an education associate at Cooper Union and Materials For The Arts (MFTA), he’s continued to take on personal projects including a comic book, digital art, and of course, a large rainbow wall piece.

“In my artwork, there’s always little references to my life but also my other work and it keeps overlapping to create this richer universe that I am trying to build,” said Olivera.

At the age of four, Olivera’s love for art began when his brother first taught him how to draw. He grew up in Brooklyn during the 80’s – when anime, Transformers, cartoons, and hip hop were on the rise – and learned to replicate much of the art he was exposed to.

“I think making art is good for you as a person and you should just do it. But if you have support that allows you to do it more and more, that’s good too,” he said

Though he had originally intended to study architecture as a high schooler at Brooklyn Tech, he decided to switch routes and attend Cooper Union for fine art. After his undergrad years, Olivera worked in publishing but found he did not enjoy it. He decided his only way out was going back to school and pursuing his master’s at Brooklyn College.

His return to the classroom led him to new outlets and mentors that had a lasting impact on him. “I was in Jack Flam’s art history class and like I was getting teary-eyed at how amazing he spoke and I realized this totally was worth the two years of class on my first day,” he said.

In his second year at Brooklyn College, he was awarded a grant to be an assistant professor under David Lantow, an undergrad printmaking professor. From there, Lantow became Olivera’s mentor and friend, teaching him that there are many periods of instability artists face in their lives and must find ways to help support themselves. For Olivera, this was teaching.

Olivera’s teaching career came almost incidentally. He needed a way to work and make money, which landed him at the Cooper Union Saturday Program. Teaching has humbled him, and brought him back to the idea of loving art for the sake of art. “When you teach, you’re reinforcing your own knowledge,” said Olivera. This enlightening experience brought his perspective back and helped him better appreciate art and opened up his humanity.

After some time, he joined a different art scene where he taught in Taller Artistico Xuchialt, a school run by local artists in Nicaragua. During his time teaching in Nicaragua, Olivera came to realize that the economy for art is vastly different around the world. While many artists in New York can create large expensive paintings here, artists around the world do not have the same resources and ability to sell expensive work. This led to an epiphany where he asked himself, “Do I want to make art that only exists in the New York art market?”

“I try to be original, but I do want my work to be accessible,” said Olivera. Going to school at Brooklyn College had an influence on his ethos behind creating art that could be made and accessed by anyone.

He found that when you put in the effort to mass produce art, it often is less expensive to purchase and support. One example of his work being massly distributed is through his partnership with Maddie Rosenberg, who is the founder of Central Booking. Their paired work includes hand-bound books, which feature Olivera’s collection of graffiti artwork. With the help of Rosenberg, Olivera has seen his work purchased and distributed to prestigious places such as Columbia, Yale, and the New York Public Library. Olivera’s work has mainly been seen around New York, which has served as a form of home base for him where he was able to display his work at alternative events. As he continued to expand his ability to spread his art, he also found that he needed to learn to adapt all forms of media including digital.

As Olivera started to have a better understanding of his art, he came to the conclusion that his work is both conceptual and autobiographical. To encompass this through his unique pieces of work that include rainbows, fractal patterns, comics, and graphic design, he explored a range of mediums: post-it notes, an app he is building with a computer programmer, and even $75 worth of legos.

Although Olivera has achieved many accomplishments throughout his career, he’s also had to overcome many difficult and draining blocks in his art to get there. After leaving Brooklyn College, he continued to try and maintain the same momentum he had, finding at one point that he had simply hit a wall.

“I had used up every professional outlet, what brought me back was just doodling, or picking up a guitar again. Your brain likes and craves it just for the sake of it. It actually does make you happy,” said Olivera.

Reigniting that same love and desire to create took a long and frustrating time. As Olivera said,    “The more you practice something the more you want to make a home for it, but there’s still a value in doing it all by yourself.” In order to value his relationship with art again, he had to learn to become calm about who he became and remain calm about the fact there are so many unknowns.

Olivera has since brought his teaching and work to middle schools, students with disabilities, and a wide spectrum of communities. Though this was not originally part of his plans, interacting with these different people helped him understand why he makes art.

“Your art better means something. It can’t just be about making money. And if it won’t cross these class and community boundaries then what are you doing?,” Olivera said.

Although Olivera has limits with his work as an independent artist, he’s learned to compromise and navigate his own artistic world. With COVID-19, Olivera believes that he is learning to adjust expectations and recognize how his field of vision has been impacted.

“I am slowly learning how to evolve and adapt to the constantly changing world,” he said.

As a deeply driven artist with a passion for creating, Olivera has developed a world that represents himself and his surrounding influences. His hard work and motivation has proven itself in the community and with the relationships he has built with other people. No matter where he goes, or which challenges he faces, Olivera always remembers where he came from.

“I feel like I’m accomplished, I’m really proud of what I’ve accomplished. I’m humbled by what my past has shown me,” said Olivera.