Two standing figures, in one projection purchasing a ticket from a “Mad Mad World” box office, in another contemplating a Coca-Cola machine. Posing in front of a fountain, a mother wrangles one child as another runs off, while the father stands patiently holding the camera. A woman in a convertible smoking a cigarette, hair blowing in the air.

These are the snapshots of American life as captured by Garry Winogrand. Presented in a multi channel installation, the images flicker on and off, brief digital projections that give us glimpses into the lives of his subjects around the country. Up for only a few seconds, we see into the lives for about the same amount of time as it took Winogrand to spot and snap the image. In the few moments the image lingers on the screen, the man will purchase his ticket and enter “Mad Mad World,” the soda will roll out of the machine and pop open, the child will run out of the frame and the woman will finish her cigarette and flick the butt onto the highway. 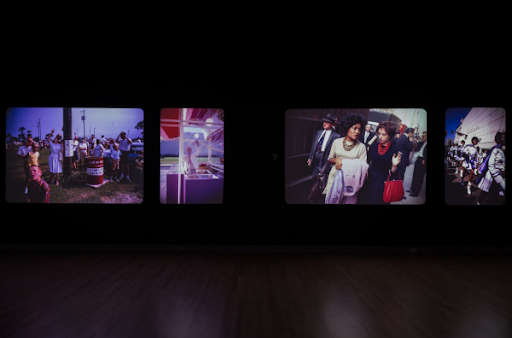 In partnership with the Center for Creative Photography, the Brooklyn Museum presents an exhibition of Winogrand’s signature American scenes. Cousins to the Great American Roadtrip Era photographs of Robert Frank or Stephen Shore, Winogrand’s photographs take on the Sisyphean task of surveying the United States and presenting it to us succinctly, to a jury of peers. In this exhibition, a fresh look is taken at Winogrand’s oeuvre. Rather than the black and white images that make his Women are Beautiful (1975) and Public Relations (1977) collections, this aptly titled survey Garry Winogrand: Color presents the little known color works Winogrand produced over two decades. These images possess the same framing and split second moments Winogrand is known for, but with a vivacity and boldness that makes them feel even more alive, and as a viewer, even more like you are in the moment. It is impossible to imagine the woman in the convertible without her California yellow hair whipping in the wind, or the mother without her slash of red lipstick against the bright white fountain and blue sky.

Shot throughout the 1950’s to 1960’s, these images have always been befuddling to me. Rather than the outsider looking in impression of Frank, or the rigorously sought and framed images of Shore, on first glance, Winogrand’s images are almost lackadaisical in comparison, capturing the magic and monotony of an era where anyone can own a camera.

In the first season of Mad Men, Don Draper is asked to pitch the Kodak Carousel. “In Greek, ‘Nostalgia’ literally means ‘the pain from an old wound.’ It’s a twinge in your heart far more powerful than memory alone. This isn’t a spaceship, it’s a time machine. It goes backwards and forwards. It takes us to a place we ache to go again,” he starts. As he delivers his pitch, he projects images of his wife and family, flitting in no distinguishable order beyond an emotional one. “It’s not called The Wheel. It’s called a Carousel,” he continues, “It lets us travel the way a child travels. Round and around, and back home again. To a place we know we are loved.”

For this presentation, the Center for Creative Photography and the Brooklyn Museum resurrect the carousel to display these lesser known photographs of Winogrand. Upon entering the exhibition, visitors are confronted with the humble device, projecting vintage color slides on the wall. This sets the stage for the next room, a corridor of slideshows showing over 400 images grouped thematically, a sort of deified viewing experience that lifts Winogrand’s images higher–to the sort of nostalgia and child’s sense of home that Don Draper is selling to us. 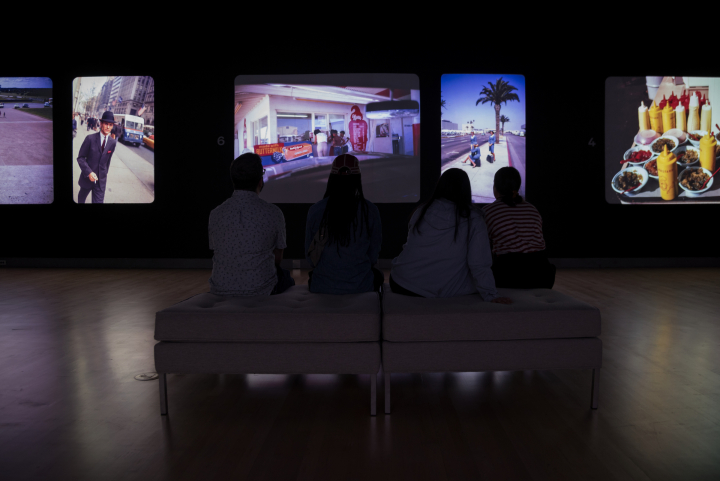 There is a certain universality to Winogrand’s images, and that is what makes them so special. The most identifiable settings in Color are New York City, Los Angeles, and various Texan cities, but they seem so simultaneously familiar and foreign that it doesn’t really matter where these photos were actually taken. Our larger estrangement from the core of our country is therefore called out by Winogrand, who acts as neither sympathizer nor judge, just messenger. This is the strangeness of his photographs: the images are of an America widely understood but narrowly experienced.

In the final portion of the exhibition, the Brooklyn Museum pulls from its own holdings of Winogrand’s black and white prints and selves into the Center for Creative Photography’s collection to pair color images related either directly or thematically. In the 1960’s, Winogrand started carrying around a color camera, and would often snap a color version immediately after taking the black and white one. Pairing some iconic black and white works with their color counterparts or others with compositionally linked images, the exhibition ties together Winogrand’s bodies of work, presenting his career as a cohesive journey rather than disparate practices. And isn’t that what America is all about?

Garry Winogrand: Color is on view through December 8th, 2019. The Brooklyn Museum is open Wednesday through Sunday 11am-6pm with late hours until 10pm on Thursday. Admission is free for CUNY students with ID.