Tens of thousands of passionate student activists marched through the streets of New York City on Friday, demanding there be an overhaul in the government policies on climate change.

“We deserve a safe future. We demand a safe future,” exclaimed Greta Thunberg, the 16-year-old Swedish environmental activist during her keynote speech in Battery Park on Friday September 20th.

Many signs were made by participants of the strike; some wore custom-made shirts, while others decorated banners. A few of the popular sayings on the many home-made signs included “there is no planet B,” and “we are skipping our lessons to teach you one.”

“[I am attending the strike] because I believe we need to renegotiate our use of fossil fuels and we need to instill the Green New Deal, and really make a change, because this climate change is not okay right now,” said Brooklyn College freshman Angela Rapp. “I think right now [the attendance] is expected to be a million people global-wide. We’re not the only city doing this strike right now. It should definitely have an impact,” she said.

Sources say that activists estimates for attendance were as high as 4 million protesters globally.

Rapp went on to speak about her belief in the importance of bringing the attention of climate change to public officials, and the devastating impact it has on the earth.

“I mean I think the shortest answer is the science. It’s a bleak picture right now,” said Ryan Bossis, a former environmental engineering student. “We need to get going. It’s been several years of following this problem.”

The protesters were passionate about wanting a safer environment for the future and the sake of the earth. Many parents were seen with their young children, and when asked about their take on climate change, much of their response had to do with wanting their children growing up in a safe and clean environment.

“The fact that we have a president come into office and completely dismantle all federal support for sustainability. It’s absolutely irresponsible. I am really pleased that New York City decided to allow [the children] to have excused absences to be here today,” said Bradley Starushen, 45. Her daughter Eliza proudly held up her home-made sign that read “don’t trash our planet,” with a picture of the Earth split in two, one half trashed and one half pristine and green. 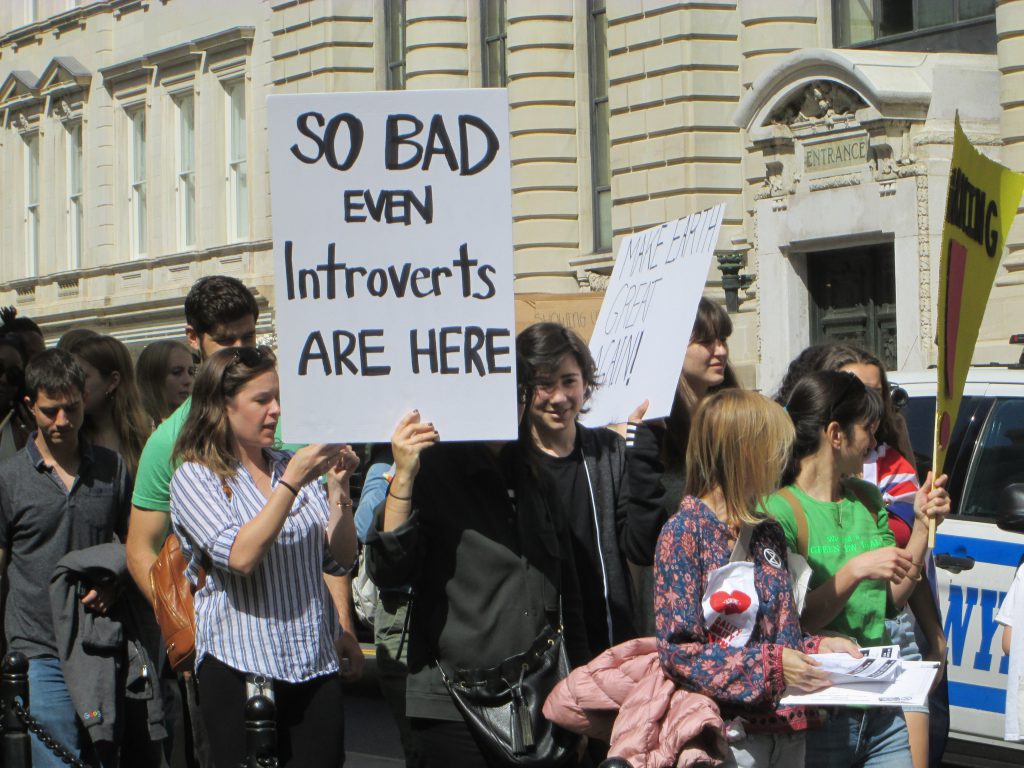 Hudis Lang, 28, was hand-in-hand with her young son Daniel when answering a question about her reasoning for attendance. “I heard about the protest, and then I googled it to find out more information, then I saw the kids protest and I wanted to bring my son so he can join the kids’ protest. Honestly, I came here because I wanted to show him how we fight in this country to show our government that we want change, and that we come out and protest. The more people that they’ll see, will make an impact on their decisions.”

The people of New York City’s plans to contribute to a cleaner environment varied from recycling more often, to using LED lights rather than lightbulbs containing hazardous mercury, to buying plastic water bottles less often, to cutting down on beef intake, to not using plastic straws. One person’s small action can make a huge change.

Daygan Sobotka described “Drawdown” when asked about his support for the climate strike. “Drawdown is about reducing greenhouse gases,” he said. “We need to be drawing down as much as possible, it’s important.”

Thunberg is the voice for the younger generations speaking out about the climate change crisis. This is an international emergency, with rising oceans, unpredictable and devastating weather, and the sources of our oxygen burning before humanity’s eyes. Thunberg is a huge reason that tens of thousands of New Yorkers showed up to the Climate Strike on Friday in New York City. Her words and her views will make an impact for future generations.

← Newer Post
Fernanda Parrado’s Metamorphosis and The Art of Rebirth
Older Post →
The Hookup Culture: The Decaying of Our Empathy