This past Wednesday, Sept. 25, the Campus and Community Safety Services released its annual Public Safety Report to the BC community via eAlert and on their website.

Under the federal Clery Act and state laws, the Public Safety Office is required to publish a yearly report that includes BC crime statistics for the past three years, as well as college policies on subjects like sexual harassment and substance abuse. The Campus Crime Statistics included crimes both on-campus and “non-campus buildings or properties” controlled by student organizations, such as the Student Center or the Hillel. The report also contains “public property” statistics from local “thoroughfares, streets, sidewalks, and parking facilities” immediately surrounding the campus, such as Campus Road and the Hillel Place Plaza.

Between 2016 and 2017, on-campus religious hate crime through vandalism decreased from five incidents to one. No hate crimes occurred in 2018. 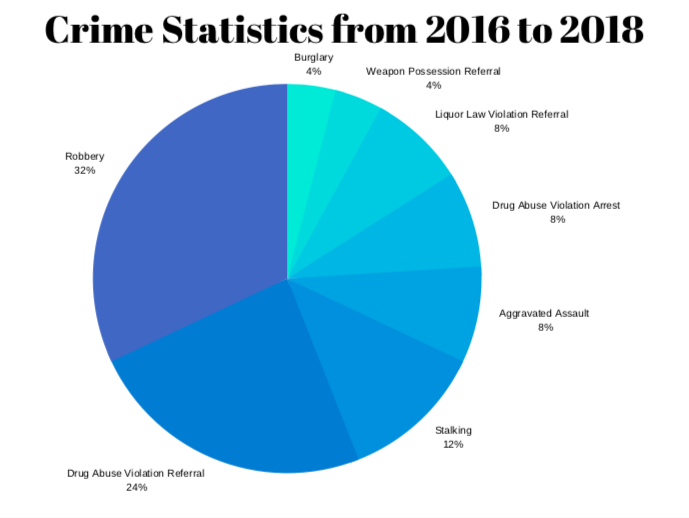 Most students did not know they had access to the report. A student who decided to remain anonymous asked, “Is that on BC News? Is it on the website?”

“Really? Through e-mail? When?” asked another student, doubtful she even received the notification. Noticeably, the majority of recipients overlook their eAlerts. However, ITS and Public Safety cannot determine how many students open eAlerts and e-mails from the college.

Business Management major Ahmed Jamal said that he “doesn’t have any concerns” on how the Public Safety Report was shared. He recalled a message that warned him of “gunshots fired” near campus. Since then, he feels “safe” with BC’s “immediate and effective” eAlert system.

Mia Galeno, majoring in Film and History, stated that before reading the Public Safety Report, she did not know of the resources and formal procedures involved with filing a misconduct report. After looking over the recent crime log, she expressed her worries about the “insane number of incidents that have happened with assault and even larceny.” Galeno thinks that there must be a “more visible and accessible way to have this information known to us students, for our safety.”

For students living in residence halls, legal aid from BC was similarly unknown. In a video titled “Sexual Assault at the ‘Residence Hall @ Brooklyn College,’” student Christine DeLisser “filed a formal report” against an RHBC employee who sexually harassed her in an elevator. The video creator Chris Omar shared that DeLisser was left “to find out that Title IX has no jurisdiction over the employees of private institutions” like RHBC. The Public Safety Report emphasizes this point as RHBC is not considered to be an “on-campus” or “non-campus” property given that it is neither “owned by the institution” nor “controlled by a student organization.” Housing halls are only suggested by Brooklyn College to students as options, but have no affiliation to the college.

According to Director/Chief of Public Safety Donald Wenz, his department “cannot enter RHBC.” However, they will respond if RHBC Management notifies them that “an incident took place with a Brooklyn College student.”

Wenz stated that students like DeLisser must report directly to RHBC Management or those overseeing their residence hall. Ultimately, BC has “no direct control” of these homes.

Notably, the report mentioned that CUNY “does not directly employ individuals to whom CUNY employees can speak on a confidential basis regarding sexual misconduct.” Instead, they are redirected to “an outside company” called “CUNY’s Work/Life Program” and other “confidential community counseling resources” within New York.

However, according to Wenz, in the case that administrators or faculty wish to proceed with filing a claim, the Public Safety Office “will take a report for anybody.” After that, Wenz states that the office will forward the disclosed information to a “detective that investigates sexual crime and sexual harassment” who will determine if “the college can arrest” the alleged attackers.

All in all, the Public Safety Report provided an extensive review of BC’s role in ensuring public safety. The security summary sheds light on issues that have improved, or have yet to improve, for the collective wellness of the college.

Private institutions may sweep the Princeton Review’s “Best Colleges” lists, but there’s one list on which Brooklyn College gives the Ivy League a run for [...]