A new season is underway for the Brooklyn College Men’s and Women’s Swimming teams, and both teams look to build off of the success they achieved last year.

In their first and only meet so far this season at the Sarah Lawrence Sprint Carnival on October 26, the men finished first out of five teams, and the women finished seventh out of eight teams. Brooklyn College’s Devin Boodha was named CUNYAC Men’s Swimming and Diving Rookie of the Week after a first place finish.

“What I realized is I can still add people to my roster. With that, the more people you have, the more events you have a chance to win,” said Head Coach Brian Jensen, who was pleased with the results from the meet, but also sees a lot of room for improvement.

Jensen was on the men’s swimming team for 2 years, before last year taking the role of  an assistant coach. Now, after just one year on the coaching staff, he has taken the mantle of head coach for both teams.

His relationships with the players and ability to understand what they go through as student-athletes gives him a unique perspective and ability to maximize his players’ potential.

“I want to build a family environment, where they feel safe, they can come talk to me, but they also know that when they’re in the pool, it’s a lot of hard work,” he said, “and at the end of the day the goal is to win, but the bigger goal is improvement, and knowing that they’re in a safe space.”

The men’s and women’s teams practice together, but compete separately at meets. The point system is the same for both teams, but they are scored separately. 9 points are won for first place, 4 points for second, 3 for third, and so on. For relays, its 11 for first, 4 for second, and 3 for third.

Points are added up to determine which school (team) had the most points, and therefore won the meet. The CUNY Championships are the only time an individual wins a medal.

Even in the CUNY Championships, the points that each individual (or relay team) wins adds up to the overall team points.

“We had a lot of guys take medals; we had some girls take a couple medals too.”

The Men’s and Women’s teams’ first home meet is against York at 6 pm on the 15 of November.

After last season, Jensen saw how good the teams could be. 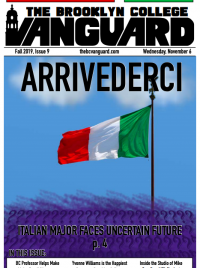 q: A Programming Language You’ve Never Heard of (And That’s A Bad Thing)

There is no shortage of popular programming languages out right now, and q is not one of them.      Not too long ago Brooklyn College’s comp [...]

The studio is riddled with old and new paintings, sketches, tubes of oil paint, palettes, brushes and jars of thinner. If you’ve ever seen an [...]