In their home opener on Saturday, Brooklyn College Men’s Soccer faced off against SUNY Polytechnic Institute, losing 2-0 in a hard fought battle.

After SUNY Polytechnic arrived an hour late to the field, the team warmed up quickly and the game was underway.

Brooklyn started off slow. In the first five minutes, Polytechnic applied high pressure and dominated the ball in the Bulldogs’ defensive third. However, showing great resilience, the Bulldogs battled back and settled into a nice flow, controlling the ball well.

The Bulldogs opened with a 4-3-3 formation, a formation that needs the three midfielders to be strong on the ball and defend at a high level. Number six, Alex Sosa, was a standout with his creative play and ability on the ball. A 4-3-3 formation also requires fullbacks to get forward on offense, as the two wing attackers shift in to help the striker. The Bulldogs have some work to do in this area.

In the fifteenth minute, Brooklyn had a bad tackle at the edge of their own 18-yard line. In the ensuing free kick, the ball ricocheted a few times before a Polytechnic player headed the ball into the net.

The Bulldogs did not track their men back, which ended up costing them a goal.

There was good interplay between Bulldog midfielders and defenders in the first half and great timely switches of play. A final pass was all that was needed to break through Polytechnic’s back line though and sadly, it never happened.

On a counterattack at the end of the first half, number 9 of Polytechnic burst down the left wing past Brooklyn’s right back. The rest of Brooklyn’s defense shifted over but number 9 was fast and agile, and he cut inside onto his right foot and slotted the ball past the keeper. Suddenly, Brooklyn was going into the half trailing 2-0, and head coach Joseph André was going to need a big speech to motivate his players.

André cited more discipline, a better defensive shape, and not committing too much as areas the team could improve in. A defense must be a unit, and only through time, practice, and familiarity will defenders learn how to move and act together as opposed to by themselves.

“Aside from that we controlled the second half,” André was quick to note.

The second half was more of the same in the physical battle taking place between both teams to an audience of sixty or so fans. There were many fouls, especially as the game was coming to a close, and Brooklyn’s urgency increased. The Bulldogs were the aggressors this half, controlling possession and creating good chances. Unfortunately though, the players took too long to get off a quality shot or when they did, fired it right at the goalie.

Ultimately, this was a crushing loss because the win was right there for the taking. Although Polytechnic may have had more chances and possession, both goals could have been avoided and Brooklyn had its good shots too. The defense needs to be better organized and improve their communication.

There are positive takeaways from this game though. After conceding within 20 minutes, a team can have the tendency to roll over and become discouraged. This was not the case for the Bulldogs. They fought hard to the final whistle. The Bulldogs used the width of the field well, and while the fullbacks could have had a greater impact on offense, they got forward and helped the midfielders switch the ball and keep the opposing defense on its toes.

After losing another home game to Farmingdale Monday 4-1, Brooklyn is sitting at 0-3, and the Bulldogs need to regroup, find their chemistry and look to turn it around before it is too late.

“Typically from year to year, you don’t get an idea of who you are until about the fourth or fifth game,” André told me. “We know a lot more today than we did Friday.”

There are always lessons in defeats. By seeing more players touch the field, the team’s overall chemistry, strengths, and weaknesses, the Bulldogs will look to make the necessary changes and turn their season around. 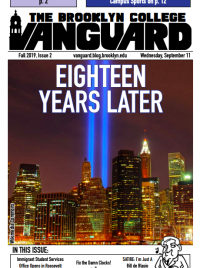 In their home opener on Saturday, Brooklyn College Men’s Soccer faced off against SUNY Polytechnic Institute, losing 2-0 in a hard fought battle. After SUNY [...]